What Does It Take To Create An Atmosphere? Peninsula Hotels Share Their View 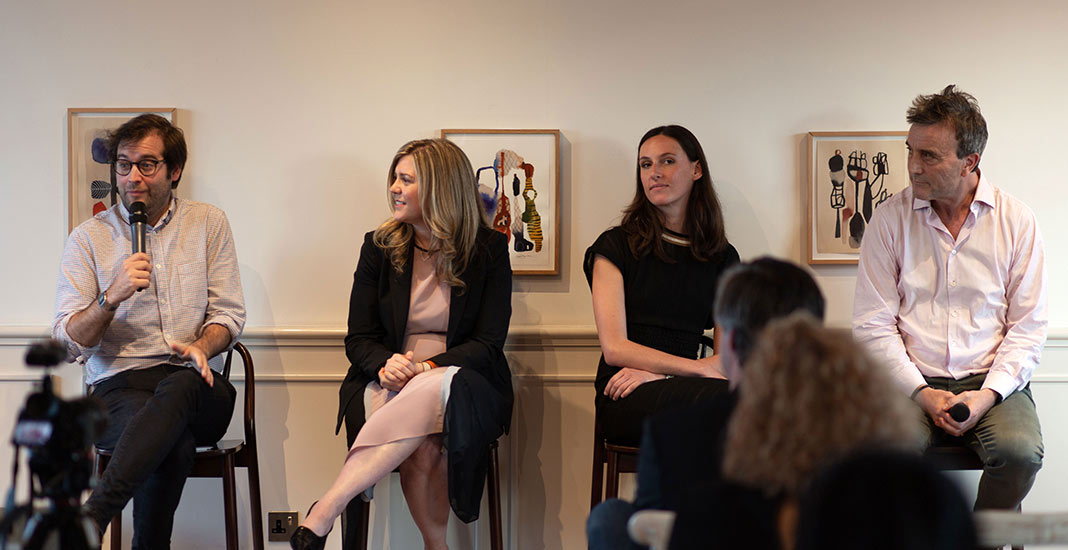 Alicia Parker, the head of marketing from Peninsula Hotels was invited to join a panel discussion in London entitled The Logo Killed the Atmosphere, probing the interplay between two definitively different, but equally important terms in hospitality: brand and place. The discussion was moderated by Studio Black Tomato’s Strategic Director and resident comedian Adam Larter. He was joined by Alicia Parker, but also Philip Knatchbull, CEO of Curzon and Marie de Poncins, Design Lead at Hume Space, a science informed and research-backed architecture and urban design agency.

The talk looked to establish the roles the logo, brand and place play when building a space, and what it takes to create an atmosphere strong enough to engage emotions and create a loyal tribe of brand advocates.

1. Should spatial experiences start and end with a logo?

As expected from the title, the discussion called into question the traditional role of logos and branding when it comes to physical spaces. Can buildings and places become iconic without these traditional markers of a brand?

According to Hume’s Marie de Poncins, yes. People will subconsciously associate spaces to senses and how they make you feel in a given moment. When you think about the world’s most recognisable landmarks or an iconic Frank Gehry building there is no need for heavy branding. Instead they reflect a shared history, culture and spirit – that transcends time and can be enjoyed by future generations. As such the architectural space and how it makes you feel is the marker of the brand, not the logo.

“You link memories to spaces and to your different senses. If the brand tries to create an authentic emotion and the place reflects that emotion, you don’t need a logo.” Marie de Poncins, Hume

According to Curzon and Peninsula, some traditional markers are required. The colours, music, furniture, art, smells and even the items sold should reflect your core brand. It’s these ‘softer’ brand attributes that differentiate from the competition and communicate to people that they are at a Curzon Cinema or Peninsula Hotel.

2. Why did we talk emotions?

Far from being just bricks and mortar, buildings and places are where people experience and feel different emotions. As such place making is no longer just the remit of an architect but also behaviour psychologists, well-being experts and city planners.  The ultimate aim is not to provide a functional roof overhead but a shared feeling that in turn inspires you to share your experience. According to Peninsula’s Alicia Parker, brands need to create a space that people become emotionally attached to. In doing this you ensure they come back – not for the logo or branding – but for the emotions they felt when entering the space.

“If you have an existing space it then becomes about how you infuse both. A brand has to ultimately be something that is felt regardless of brand or place. The only way you’re going to create something is through emotion.” Alicia Parker, Peninsula Hotels

The logo isn’t what creates this feeling but instead triggers it when seen again. At Curzon cinemas, people often clap when the logo comes up on screen before the movie starts. In this case the logo triggers a recognised feeling that embodies the whole Curzon experience. A logo should be a reminder of the feeling of being in a given space. It is what keeps the experience salient once it ends.

Do brands and places exist independently of their location? According to Peninsula’s Alicia Parker, you have to be willing to make a decision when a building does not fit the brand. In expanding to London, Peninsula have waited for the right space and location to become available. It’s important to have a space that fits the brand and not try to fit your brand into a space. Brands need to coexist rather than superimpose themselves onto a particular location.

And this doesn’t end with physical dots on a map. According to Curzon’s Philip Knatchbull this thinking should be applied to the digital world. The experience of your brand needs to be consistent and in the right context or ‘location’ both on and offline. You need to communicate the right message to the right people in a way that is authentic to your brand.

“Place has an enormous part to play in our brands, whether physical or digital.”Philip Knatchbull, Curzon

4. What role do people play?

There are many different markers of brand: logo, colours, art work, but what about people? Peninsula hotels focus their emphasis on a strong generosity of spirit. This not only embodies the design and treatment of the spaces but also the people that interact with the brand both internally and externally. Their employees are treated well and as a result treat the guests well. The people embody the place and help dictate the overall feeling for other people.

A place can make you feel something but what is happening in that space is what is critically important. Those emotions you feel become connected to the physicality of the space itself and you remember that feeling. How you were treated in the space also plays an important part, who were you able to be within that space? How you feel as a human is affected by where you are. As such, people seek out places that make them feel good and align with their interests and belief systems.

5. When does the logo kill the atmosphere?

The overwhelming consensus from the panelists was that you can’t force people to feel things. And once a feeling is had, you can’t control whether people feel it again. When a logo is used as a painful reminder of what a person should be feeling, it becomes overwhelming and exhausting. We are bombarded with messages all day long – so as humans we aren’t seeking out more messages. A strong emotional feeling engendered by a space shouldn’t rely exclusively on a logo. Brands need to ask themselves whether their branded place would be recognisable by its customers without the logo. Both the Curzon and Peninsula hotels use ‘softer’ branding such as colours, scents and sounds that create an atmosphere. These would exist without the logo and create a feeling that isn’t co-dependent on one icon.